Have you ever had a nose bleed?

What do you do?

Please tell me that you try to stop the bleeding!!!

I used to think that Money, politics and religion were all taboo discussion topics. But every year I realise that these are very powerful aspects to living in a society and surely for there to ever be peace on Earth, we all need to talk MORE about these things rather than avoid discussions for fear of upsetting one another over varying ideologies of what is right or wrong.

What do you think?

Life is so much more complex than right or wrong. Black or white. On or off. In or out. right?

The current systems, they make no sense, not now, not after we’ve clearly turned a corner in social awareness following the rapid evolution of technology.

Surely it makes a lot of sense for old systems to be rethought now. For archaic process and policies to be adapted.

And not in the way the current powers seem to be doing it, backwards!

Whilst governments tend to follow a ‘one rule for them and another for us’ agenda (YES! We’re talking partygate, amongst all the other hypocritical actions every single party seems to be making these days!) there seems to be a turn towards a ‘one size fits all’ attitude to policy that I guess they must be using to help edge us into a boundary, to try and control everybody as the same.

The reality is that we are not the same.

Talking about our differences leads to understanding and that is huge in the world of civilization. Understanding what makes each other tick and building support for one another that enables us to work together has to be a vital step in making humanity truly ‘one’.

It cannot be about molding us into one shape, it has to be about unison as ‘one’.

I think that the ISS is a prime example of differences coming together for a greater good. Whether you agree with exploration of space or not, if you look at how the different countries have combined their knowledge and expertise, it truly is a powerful message to the rest of the worlds professions.

Sure, the nature of the sciences does tend to lean on a more ‘black and white’ way of thinking, something is either right/wrong, it works or it doesn’t, so you could argue that the rules they play by are more ridged. But honestly, I think the beauty behind science and scientists is that they continue to question, even after finding effective results, like the arts, the sciences require a lot of experimentation and ‘play’ as constant new findings unfold.

The idea that politicians, and I’m talking about career politicians here, who want to enforce their beliefs and push their agendas onto people either through sheer lies and deceit*, only care about personal wealth and clearly don’t care at all about ‘the people’!

This kind of ‘democracy’ has got to stop!

It’s no wonder the other countries with different ideologies are against us, they do not see our way as being any better than theirs, otherwise why wouldn’t they change? Why wouldn’t they revolt and… Well, it’s because ‘the people’ have nothing to do with the bigger picture as far as world leaders are concerned, we are simply a means to an end. We are pawns in a very different game than anything we can truly understand.

Surely that’s not an over dramatic statement, is it? When you are told you have a choice but that choice is ONLY ‘A’ or ‘B’, that doesn’t make for much of a democracy, it’s simply one step away from autocracy, especially considering the ruling authority has already vetted the choices and is prepared for either one to be picked.

‘So what about partygate? What’s the big deal here?’

When politicians can break the rules (laws) and get away with it, while ‘the people’ are punished worse than their leaders for the same crimes, chaos wins!

That is not a just-world.

That is a sickness.

What do we do when we’re sick?

We sweat it out right?

The artwork featured in this blog is unauthorised so I am naming the artist, ‘jamesmylneart’ and the following link directs you to their page, go and give them a like HERE!
https://www.instagram.com/jamesmylneart/ 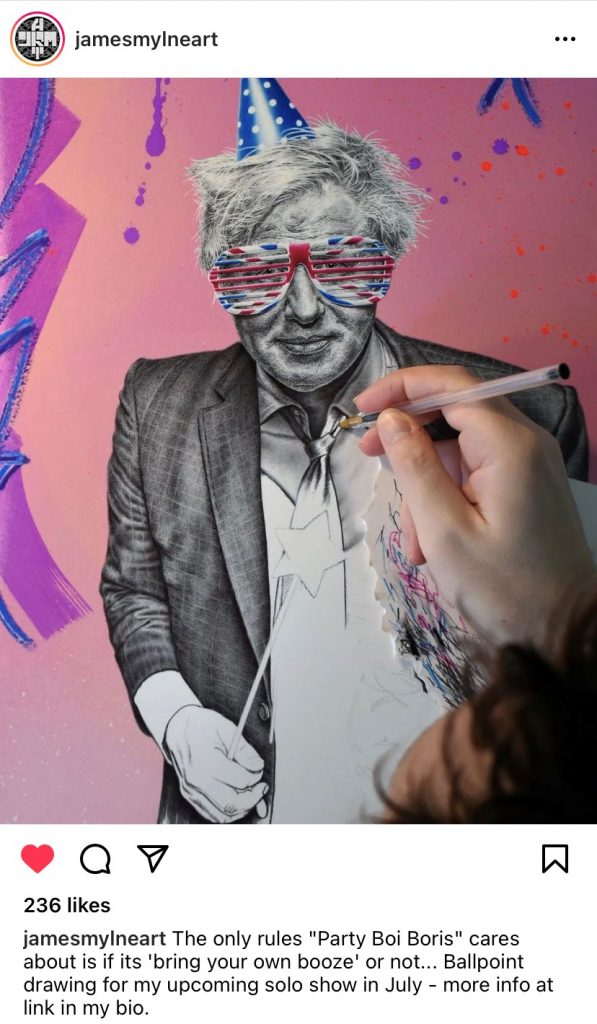 “No – but I am sure that whatever happened, the guidance was followed and the rules were followed at all times.”

“Will the prime minister tell the House whether there was a 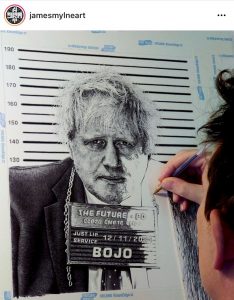 ‘Indoor Gatherings of 2 or more people we banned by law in June 2020 – but 30 People attended a birthday gathering, ate cake and sang to Bojo on his special day!’

Notice how BoJo obnoxiously started his response with ‘NO!’ …That’s the UKs stroppy PM trying to put a stop to the questioning.

He’d celebrated his birthday while 84 people died from Covid alone and people were not allowed to attend funerals/mourn with their families.

And yet when questioned, in parliament-no less, he clearly knew he was lying/deceiving everybody with his answer.

Is this really someone the UK, NATO or G7 and the rest of the World can trust when it comes to being told the truth about efforts surrounding things like, CLIMATE CHANGE? HUMAN RIGHTS? ECONOMIC SPENDING?

I don’t mind what political party you follow or what your beliefs are, I only have one question to ask you…

What do YOU do when you ever have a nose bleed?

Do you try to stop the bleeding?

Or do you let the blood keep on flowing?

Doesn’t the same principle apply to the viruses that are corrupting our systems?**

Wishing you a great day and thanks for reading!

If you want to discuss further, drop me a line 🙂

(**yes, these are our systems, because we pay our taxes which pay for these systems, so they are OUR systems! The people outnumber the power and that’s something we need to remind ourselves of daily.)

This is my disclaimer, I feel the need to vent and use this platform to express those feelings, while there is of course an element of drama and entertainment in the way I present my ideas. I want you to know that I take it all seriously, I do not condone or intend to be a stirrer of the pot.

Unless justified through defensive measures, I am a pacifist so I stand with Ukraine in the current conflict.